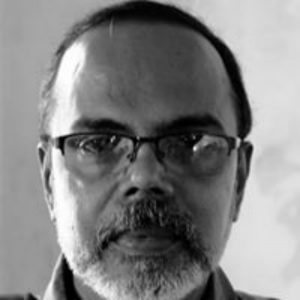 2001: PhD in English Language and Literature,

University of Calicut Thesis: The Poetry of the Process: A Study of the Cantos of Ezra Pound

1981: MA in English Language and Literature, University of Calicut

2016- Member, Board of Studies, MVC (Master in Visual Communication), St Thomas College, Thrissur Kerala. Designed courses related to Film and Media Studies for MVC and for a proposed programme, MA in Cinema Studies.

02 11 2017. “Containment, Repression and Resistance at a National Seminar on “Whither Campus? Towards an Apolitical Academia?” at Govt. Victoria College, Palakkad, Kerala.

16 12 2014. “Modernism in Writing: The Early French Move” at a National Seminar on Movements in Time/Space” at Govt. Victoria College, Palakkad, Kerala.

04 09 2013. “The Spell of Myth; the Spell of Ideology: On the Modes of Revision in Classical Indian Literature” at a National Seminar on “Myths and Folklore in the Milieu of Indian Writing in English” organized by Dept. of English, Sri Vyasa NSS College, Wadakancheri, Kerala.

03 02 2013. “Modernity and Methodology” at the CPRACSIS International Workshop on Methodology in Social Sciences and Humanities at Thrissur, Kerala.

23 02 2012. Delivered a lecture titled “Driven to Instruct: from Cavemen to Certain Moderns” in the National Seminar on Belief, Reason Technology and Humanities at C Achuta Menon Govt College, Thrissur, Kerala.

16 01 2012: “They don’t Know They Give a Shrug: On Some Questions John Ford didn’t have to Answer” in the National Seminar on Living Cinema off/on Screen: Beyond Image, Sound and Text at Govt Victoria College, Palakkad, Kerala.