“The KNOWN among the UNKNOWN”: Short Film 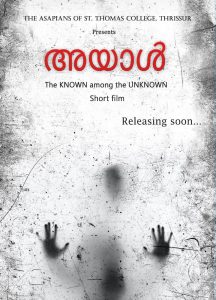 ‘അയാൾ’ a short film by our asapians of 2019-2020 batch was officially released on October 15, 2020. World Students Day has been chosen for the screening as it is purely an effort by the Students of St. Thomas College.

Not everyone who shoots a short film on their phone, utilising limited resources become the next hit maker, other than pure, unadulterated talent. This sets them apart making their first attempt successful and deserves a crowd to sit down and watch their shot!